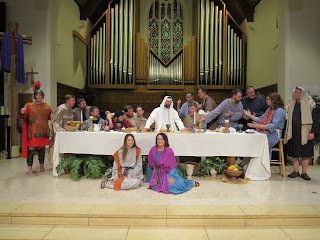 With Holy Week 2018 completed, I've had a few people ask me how I come up with these dramas we use during Maundy Thursday and Good Friday.
I remember being in Ada, MN when I wanted to engage teenagers more intentionally in the Passion narrative of Good Friday. Using the music of Samuel Barber's "Adagio for Strings", I was able to use youth to create still frames in a dramatic fashion that led the observer through the events of Jesus crucifixion and burial. It helped that the church had stage lighting that gave great effect to the presentation.
Some of you may remember the BMG music service. One could order a music CD and get another for next to nothing. I would order the most interesting music and listen to it for possible use in Good Friday dramas. My favorite is Chantecleer's rendition of "Steal Away" which has a great crescendo that I time with Jesus' crucifixion and then trails off for a beautiful burial scene.
Another year I discovered a music group by the name of Secret Garden, a Norwegian music duo that produce some beautiful and unique music. One song in particular was called "Hymn to Hope" that incorporates violin and bagpipes for a haunting melody that worked well for a Good Friday drama. For a unique twist I thought of two girls holding a large black sheet to symbolize death that was ever present in scenes that reflected Jesus' ministry. Again, there is a crescendo in the music - a perfect moment for crucifixion - and then trails off so I had the girls take the Jesus character off the cross and wrap him in the black sheet and lay him on the ground for a dramatic end. And that is how we close the service. So I now have three dramatic portrayals that I can incorporate into Good Friday and rotate if a congregation likes that sort of thing.

Memorial Lutheran in Afton, MN, had a tradition of offering a living tableau of DaVinci's Last Supper which included a script introducing each disciple. They would alternate years, presenting the last supper portrayal one year for Maundy Thursday then the next year do a Good Friday drama.
I did some theological editing of the script for Maundy Thursday and, working with lay leaders who recruited actors from the congregation and got them in costumes, we were able to make DaVinci's masterpiece literally come to life.
I am still struck by people's responses to this last supper portrayal. Each disciple is introduced and then they gather behind the table. When Jesus is finally introduced, the lights go out, the men get into their DaVinci pose, and then the lights come on. People actually gasp, whisper, take a breath as the living nature of this portrayal seems to catch them off guard. Even though they know that it is coming.
At Trinity, third graders receive instruction on the practice of Holy Communion and Maundy Thursday is their first partaking of the sacrament. We actually have Jesus bless each child and have the disciples serve communion, first to those families who child is receiving communion, and then to the entire congregation. When the service is over we allow parents to take pictures of the class with the tableau in the background.

Posted by Country Preacher at 6:44 PM No comments: